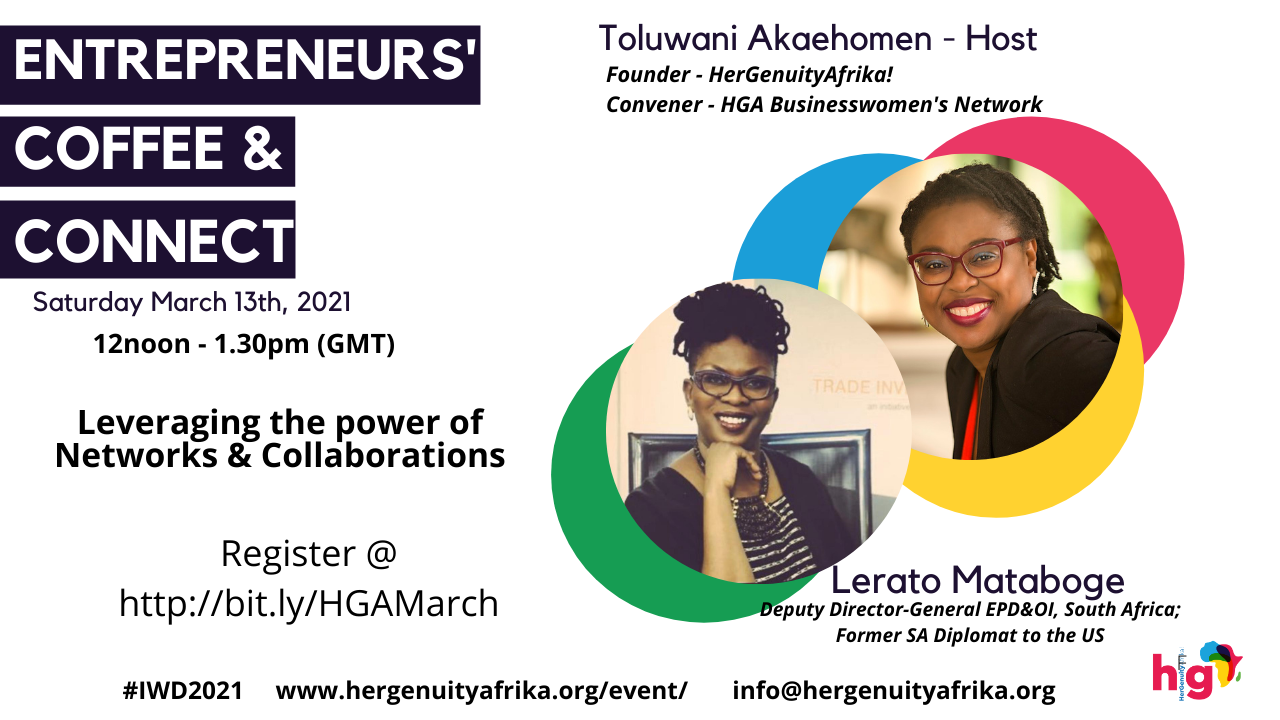 Leveraging the power of networks and collaborations

We’re excited to be hosting Lerato Mataboge at our March edition of HGA Entrepreneurs’ Coffee and  Connect. Register @ http://bit.ly/HGAMarch

Ms Lerato D. Mataboge is currently the Deputy Director-General for Export Promotion, Development and Outward Investments (EPD&OI) in the South African Department of Trade, Industry and Competition (the DTIC). Formerly the role was referred to as Deputy Director General: Trade and Investment in the South African Department of Trade and Industry (the DTI). In this role, Ms Mataboge provides strategic support and advise to the Departmental leadership and the Presidency on key engagements with global stakeholders for the attainment of the country’s economic growth objectives.

Prior to this role, Ms Mataboge founded and headed Trade Invest Africa, an initiative of the DTI aimed at creating sustainable partnerships with the private sector towards the attainment of greater levels of intra-African trade and intra-African investments. In this role, she facilitated the IDC, DBSA and ECIC’s infrastructure and industrial projects into the rest of Africa as part of executing the SA Inc. approach which was refined through Trade Invest Africa. She previously held the position of Chief Director for Africa at the DTI with the responsibility of strengthening South Africa’s bilateral relationships with countries on the African continent. In June 2011, she completed her four-year term as a diplomat (Minister: Economic) where she was South Africa’s Chief Trade and Investment Representative to the USA, based in Washington D.C.

Ms Mataboge is a passionate advocate for Africa’s economic growth and development. She holds a BA (Law and International Relations) degree as well as an Honours degree in International Relations from the University of the Witwatersrand in Johannesburg. She obtained a Masters degree in International Political Economy (International Trade and Global Finance) from the University of Warwick in the UK. Ms Mataboge also holds certificates in trade negotiations, bilateral investment treaty negotiations as well as project management; awarded by the European Institute of Public Administration in the Netherlands and WTO/UNCTAD, respectively.

She completed Executive Training in infrastructure project conceptualization and preparation – “Infrastructure in a Market Economy” – from the Harvard Kennedy School of Government in 2013. Ms Mataboge is an Archbishop Desmond Tutu – Oxford University Fellow for African Leadership. She was featured in the Destiny Magazine’s “Power 40 under 40” feature in November 2015, in recognition of her leadership on African economic issues. Ms Mataboge was co-chairperson of the South African Presidential Working Group on the North-South Corridor (2011-2015). She currently serves on the Board of the Export Credit Insurance Corporation of South Africa (ECIC).